Introduction to the Editor

Guts is the editor we used to create Torchlight 2. It can do an awful lot of stuff, and because of that it's a big program with a ton of different branches and features. We haven't simplified it or removed any of the tools we used to make the game, so it can be a little intimidating when you first open it up.

Don't worry! You don't have to understand every button and property to do what you want to do, you probably only need to learn about a small part of Guts, and there are lots of tutorials to get you started.

No matter what you want to do, you should understand these basic parts of the editor: 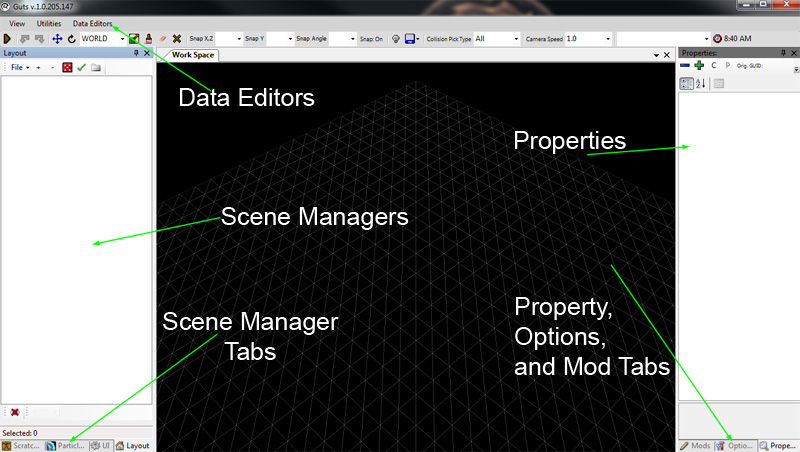 The Data Editors menu contains some of the most important parts of the Editor. If you want to create monsters, sounds, or dungeons, you'll use the editors in here.

Tile Set and Room Pieces
Edit the pieces that are assembled to make dungeons.
Units
All monsters and items are units, and can be edited here.
Sound Banks
Sounds are grouped and categorized here.
Graphs (Stat Lines)
The graphs in here control all sorts of things, like the amount of damage monsters do per level, and players' dodge chance per level.
Affixes
These are the magic bonuses monsters and items can receive.
Effects
Create and edit effects like knock back and armor bonus here.
Camera Shakes
Camera shakes add to the impact of explosions and big hits. In this editor, you can customize how the camera moves.
Spawn Classes
Spawn classes are groups of items or monsters that can be randomly selected from. For example, QUESTREWARD_SIDEQUEST is a large group of items from which the game can randomly select rewards for side-quests. TEMPLESTEPPES contains monsters that can randomly spawn in the Temple Steppes.
Dungeons
Create and edit dungeon properties.
Level Rule Sets
Create and edit the rules for dungeon levels.
Texture Sheet Maker
This bundles groups of images into one large image, which is easier for video cards to handle.
Skills
All monster and player skills are edited here.
Quests
Quests!
Recipes
Recipes for the item combiner, like turning three health potions into a better health potion.
Sets
Bonuses for item sets.
Unit Themes
Themes for monsters and items, can apply visual effects.
Editor Brushes
These are brushes for layout editor, which allow level designers to quickly paint in common room pieces, like plants and rubble.
Themes
Themes that can be applied to dungeons.
Level Feature Tags
These are used to randomly place a specific number of something in a level. Used for things like golden chests or quest set pieces.
Inventories
Create and control inventory slots.
Stats
Create and edit stats, like dexterity, charge, and kill counts.
Unittypes
Control the hierarchy of unit types. For example, a Bow is a Ranged Weapon, which is a Weapon, which is a Takeable, which is an item. This matters when a skill requires a Ranged Weapon.
Triggerable Actions
Edit Triggerable Actions, which are sometimes used in complex skills.
Waypoints
Points which players can warp between.

The left side of the editor window contains scene managers. The scene manager you have selected determines what sort of thing you are editing. A list of all objects in your current scene will appear in the white area, and you can click items in the list to select them. Right-click in the scene manager to bring up a menu to add new objects to the scene. 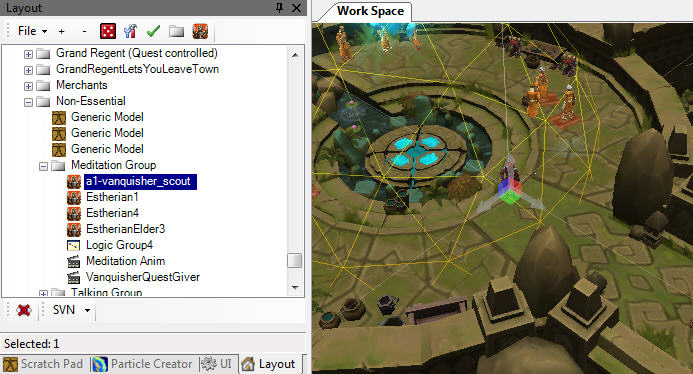 The tabs in the bottom left corner of the screen let you switch between the four different scene managers.

Layout
The Layout Scene Manager is for building levels. This is the tab where you can load and edit level chunks, edit prop layouts, or assemble pieces to make your own rooms.
UI
In this tab you an edit the user interface, including all menus and the HUD.
Particles
Particles, visual effects, are created and loaded in this tab.
Scratch Pad
This tab can be used for either editing level layouts or particles. It can be useful for opening a missile or skill layout while having a level layout open in the layout tab. This way you can see your missile against the backdrop of the level.

The properties tab on the right side of the editor window is where you can change the properties of whatever object you have selected in the Scene Manager tab.

In the screenshot below, a lily pad room piece is selected, and its scale is being changed in the properties tab. 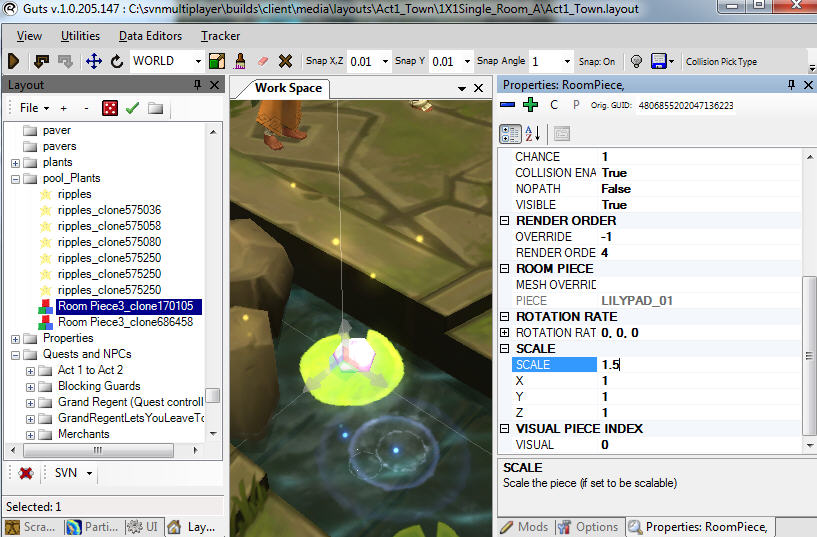 In the bottom right you can switch between the Properties, Options, and Mods tabs.

The options tab contains a lot of editor options. The options set here only effect the editor, not any of the things you are editing. For example, you can set a background here while editing a level, but it doesn't have anything to do with what the player will see when playing that level.

The Mods tab shows you the files you have changed for the current mod you are creating.