Manipulation of stats on units is done through the Add/Set/Clear Stat effects. Clear stat resets the stat to the stat's default value.

Open up the Data Editors->Affixes and look at ADD_ANY_200 for a typical example.

Effects can look for stats on the unit they are being applied to or being applied by and use them to modify their effect value. Let's take a look at the RAILMAN_FORCEFIELD affix.

So the Stat Modified Value used will be the following:

In this example, Effect Level is used to boost the knock back resistance value. Let's say the skill is rank 5 and specifies to apply RAILMAN_FORCEFIELD as a level 2 affix, yielding a level 2 Effect Level. Since the StatPercent is 100 and the Base Value is 5, we get

Note: Effect Level is a special case Static Stat that is not declared in the Stats Editor

Walking through the second effect as an example, the Forcefield shield adds a 60 value shield and uses railmanbonus at 50 StatPercent and has StatModifierIsBonus set to true (60 is 60% of the Shield Buffer graph at the effect's level). Railmanbonus is the amount of charges we had available when we casted the charge, added to the unit as a stat in the Forcefield skill. Let's say we had a full 5 charge bar.

So our bonus value for a full 5 charge bar is 150% of the Shield Buffer graph at the level of the skill.

Essentially the skill reads "For every charge, add half of the base strength of the shield to the total effect"

Using Stats in Skills and Triggerables

In Retaliate's case, the skill is limiting to hitting a specific monster only once in a specific time frame. In order to achieve this, we apply a flag named BERSERKERRETALIATE on any enemy we damage, which you can see in the Skill->Level1->Affix foldout being applied via BERSERKER_RETALIATE_FLAG.

Note that the BERSERKERRETALIATE stat has a Duration of 1 and an increment value of -1 (and a max value of 1), so after 1 second of being applied any enemy who we had hit will be able to be hit again with this skill.

If the Statwatcher was attached to the affix instead (Skill->Level1->Event_Start->Affixes->Statwatcher), then the skill would execute and the event would be applied, so the target would take damage regardless as often as the skill is triggered. The BERSERKER_RETALIATE_FLAG affix would only be added once a second, however.

Triggerables watch events akin to Statwatchers checking stats, however they are triggered when the specified event occurs rather than as part of a user activated ability as Statwatchers work. Triggerables can watch for any Add/Clear/Reduce Stat event, meaning that you can use them in tandem to check for state changes. Take a look at any of the ITEM_SLAYER_X_Y triggerables for examples of this (used for Augmented Weapons). 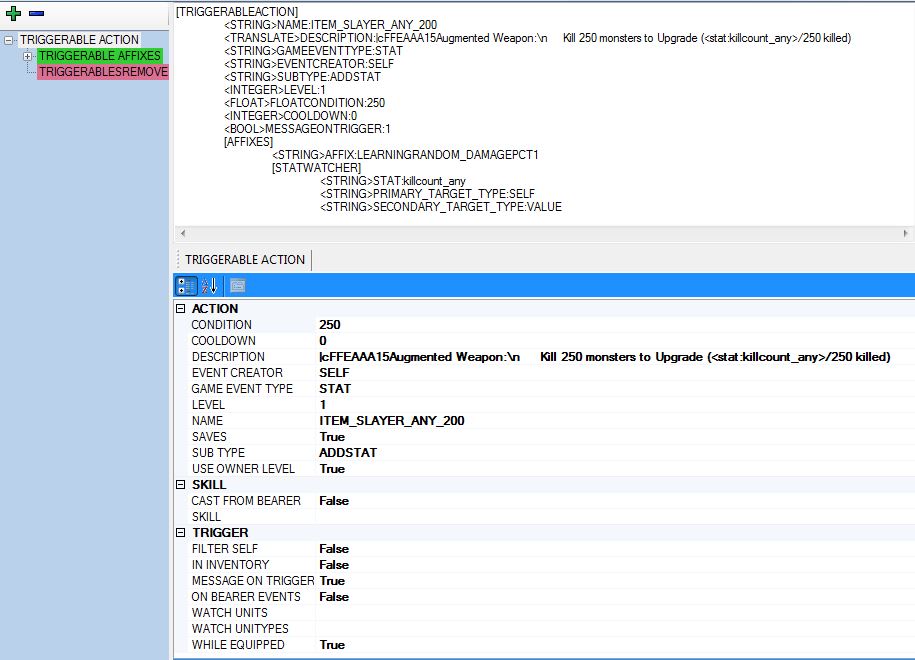 In Torchlight 2, Augmented Weapons add stats to themselves whenever the corresponding event (kill monster x in this case) happens. So to actually augment the weapon, we watch for an add stat event. The triggerable's Statwatcher then checks if we've killed enough monsters, and if we have, it adds the augmentation via a new Affix.

Additionally, Triggerable descriptions can display stat values by adding <stat:STATNAME> into the description string, which in this case allows us to display your current Kill X/Y monsters progress.