Additional useful information that isn't covered in the other tutorials.

It's a good idea to load a background when you make particles so that you can get a better idea of how they will look in-game. To do that, select the Layout tab on the left-hand pane, and select Open from the File menu. You can make your own backgrounds, or use the ones in the base Media directory.

You will also want to get the lighting to look the way it will in game, so go to the Options tab on the right Pane, and set ~Use Rule Set to true. Then, change the Rules Set property to "catacomb\burialchambers_rules.template", or any other catacomb Rules Set. Finally, set Lantern Light to True. You can also control the Lantern Light property by clicking the light bulb button in the top middle of the window.

You can set Play Environment to True to show the environmental particles and time of day lighting in outdoor Rules Sets.

Once you have that all set up, you can switch back to the Particle Creator tab on the left and make your particles, and see exactly how they will look in that environment.

Most particles are textures on square or rectangular meshes. These rectangles are called billboards. The Render Type property on particle systems controls how the billboards are aligned relative to the camera. Here are the most useful types:

Billboard
The most common setting. Particles on this setting always face the camera.
Billboard Forward
Particles face a set direction, and aren't affected by the camera. Useful if you want to hand place particles with specific orientations.
Billboard Forward Camera
The particle billboards always stand straight up, but otherwise face the camera. Good for things like portals and beams of light that need to appear grounded in a particular spot.
Billboard Perpendicular Self
The billboard always faces the way it's moving, aligning its Z axis.
Billboard Self
The billboard aligns its Y axis with the way it's moving. Good particles that stretch out as they move.
Billboard Up
The billboard is parallel to the ground plane. Good for lights and any particle that needs to appear right on the ground, like burn marks.
Billboard Up Camera
The same as Billboard Up, but it will rotate with the camera
Entity
Used for Meshes
EntityWorld
Also used for meshes, allows rotation
RibbonTrail
Allows long, ribbon-like particles

Spawning Particles on the Ground

To make particles that always spawn on or near the ground, use the Spawn on Ground property on the Emitter. This only works if Keep Local is set to False.

You can control the height of the spawned particles with the Ground Offset property. If you set Must Spawn on Ground to True, then the particles won't spawn over gaps in the ground.

Particle systems have a property called Quality which controls whether the particle will be shown on different particle detail settings in-game.

You can use this on particle systems that look cool, but which are expensive and not really necessary.

Particles can be used to make lights and shadows. For either, make sure the Is Light property on the particle system is set to true. Set the Type property to either Light or Shadow.

Both lights and shadows can be bright or dark.

Lights always project straight up and down, and illuminate all surfaces above and below them. Shadows don't cast on some surfaces, and are sometimes orthographic depending on the level. It's usually best to just use lights, even if the particle is going to be black and darken the area.

Make sure Lantern Light in the options pane is set to True, otherwise you won't be able to see any lights. You can control this easily using the light bulb button at the top of the editor window.

Particles systems have a Sort Index property that determines what order they draw in. Distance from the camera doesn't affect the order in which particles are drawn, far away particles will draw over close particles if the far one has a higher Sort Index.

When you make a complicated particle system, assign low sort index numbers to particles that should be in the background and higher numbers to foreground particles.

Particle textures can contain multiple images in a grid. These can be cycled through to create animations, or they can be randomly selected per particle. 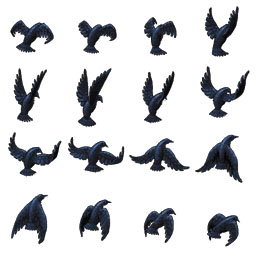 When you use a texture like this, set the Frames High and Frames Wide properties on the particle system. For the above image, both of those properties should be set to 4.

You will also need to add a Texture Animation affector. With this affector you can control the animation speed, and set whether particles get a random starting frame.