Here is a list of assorted tips, tricks, and tidbits of knowledge that can help you become better at using Guts and designing levels in general.

Cover up stuff that looks bad.

Cover up funky intersections by placing other room pieces. Does that boulder look weird intersecting with the ground? put a bush in front of it.

Placing bushes and grass in front of this boulder covers up the weird seam at the bottom.

Play your level often when decorating.

The view in the editor is different enough from the in-game view that you'll find a ton of little quirks that need to be ironed out just by playing. The sooner you find these quirks, the less stuff you have to redo.

Don't obscure gameplay areas too much.

Avoid placing lots of tall objects that hide places where you can walk. You don't want to be fighting a bunch of monsters while you're all behind a big wall. You can place blocking decorations where you don't want the player to walk, or you can simply remove the object that is blocking the view.

How to select all of the same type of object.

F4 will select all similar room pieces, layout links, and other things.

Having trouble renaming groups? Press F2 with the group selected!

In lighting mode, Ctrl + 8 will turn off the player light but still allow for other lighting to show up.

Rotating a bunch of stuff, and all of the pieces get funky? Before rotating, select everything, turn snaps off (Hotkey: T), hold ctrl and press the right or left arrow. You should be able to rotate everything fine now.

Getting a problem like this? Try the tip above!

What are Level Rule Sets?

Level Rules explain how a level is generated. It includes what chunks to use and how they are put together. You also specify lighting, music, camera distance, and other visual qualities. You also specify Feature Tags (tutorial), which have a significant impact on balance and other aspects of the level.

Start a new level chunk with a template.

When making a new level chunk, start from a template if one is available. You'll want to leave parts of it in tact so it will match up to nearby chunks when a level gets generated. This method is detailed in the Outdoor Level Chunk Tutorial.

Media\Layouts and Media\Levelsets\Props are the two most common folders for level design.

Shadows are a type of light that don't show up on noshadow pieces, and they don't show up if their height is over about 6. They will work if you sink them into the ground, though.

Duplicating an object without moving it.

Some objects work at any height.

Path node Occupation boxes and spawners work at any height, even if they're below a pathable area.

Moving things in a timeline

When using timelines to move unit triggers, put the unit trigger in a group and move the group instead. In general, it's good practice to move items by placing them in groups and moving groups instead.

Connecting lots of stuff in the Logic Editor

You can hold shift down when making a connection in the logic editor. If you do this, you can connect one output to multiple inputs quickly.

Keep all Level Objects in the Layout Scene Manager organized within Groups. It requires some extra time initially to set up, but can save a ton of time in the end. It allows anybody editing the Layout to quickly find what they're looking for and makes it easier to manipulate the Level Objects. 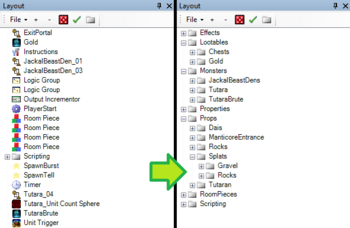 It is also a good idea to rename certain Level Objects to be easily identified when using them in Logic Groups or Timelines.

Keep Floor/Wall Tiles on the Grid

Ensure all floor and wall tiles are on the grid to help prevent the level chunk from overlapping any neighbor chunks and just make things easier in general.

After adding the first floor/wall tile Room Piece to a level layout it's best to press Ctrl + N to reset the snap and rotation on it ( double-check the proper snap values are set at the top of the editor before using that hotkey ). Then duplicate that Room Piece over and over to build the rest of the level with confidence that it's already properly aligned to the grid.